The Department of Justice says it is planning to update legislation on “hate speech” after a post on Social Media directed at Lidl by Gemma O’Doherty challenged how a mixed-race unmarried couple used in their advertising campaign could be accurately described as “The Ryans”. “Ryan” being the women’s surname. She also urged people to buy from Irish businesses:

“German dump @lidl_ireland gaslighting the Irish people with their multicultural version of ‘The Ryans’. Kidding no-one! Resist the Great Replacement wherever you can by giving this kip a wide berth. #ShopIrish #BuyIrish.” 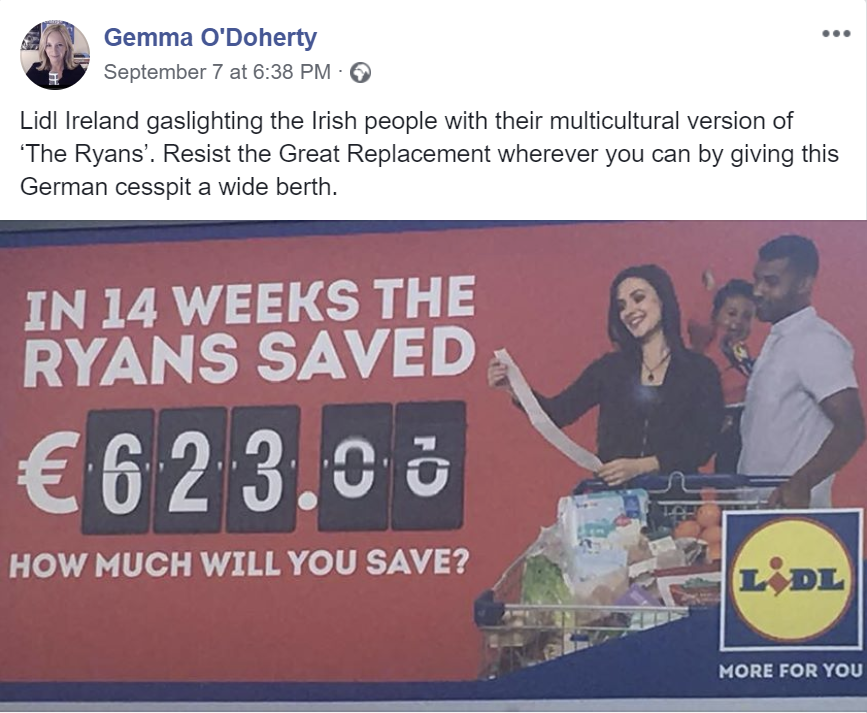 Actress Fiona Ryan (33), her fiance Jonathan Mathis (32) say they now may leave Ireland with their 22-month-old son if “hate-speech” legislation is not updated. Teary-eyed Fiona Ryan who works as an actor explained:

You can watch the actress “killing a black man” in her film reel at 2:20 here.

The couple allege the comments beneath Gemma O’Doherty’s post left them fearful and angry.

RTÉ also referred to the couple as “the Ryans” but didn’t explain why if the couple aren’t even married yet or whether this counts as false advertising. It is unknown how much the couple were paid by Lidl to be put into the public domain in their advertising campaign.

The Irish Times is reporting that Ms Ryan and Mr Mathis met in London where they both worked but returned to Ms Ryan’s family home in October 2018 to save money, and took part in the Lidl campaign to boost their savings.
https://www.irishtimes.com/news/social-affairs/couple-in-ad-campaign-left-shaking-and-fearful-after-online-abuse-1.4031549

The Department of Justice now says it’s to hold a public consultation to gather views on how to update the relevant legislation on “hate-speech”. The couple say that needs to be done as a priority.

Jonathan Mathis pulled the racecard and said that the worrying part was legislation just isn’t good enough in Ireland — “You know, people from minority backgrounds aren’t being protected.”

Leo Varadkar spoke to RTÉ and said: “In terms of hate crime legislation, that’s an area we’ve done some work on and it’s always a difficult one to get right because you never want to be in a position where you are stifling free speech and one person’s hate speech is another person’s free speech but there is some work being done on it by the AG and the Department of Justice.”

In a statement, Lidl said that following what they described as an “offensive tweet”, the company had blocked Gemma O’Doherty and reported her directly to twitter.Twitter has since removed the tweet but it can still be seen on facebook.

Earlier this year, a Lidl boss in the UK admitted that free movement of people across the EU had depressed wages in Britain.

In 2008, Lidl was accused of using methods reminiscent of the Stasi secret police to spy on employees in Germany. The company, reportedly monitored details of intimate conversations and personal relationships. Surveillance teams would arrive early on Monday mornings to install between five and 10 miniature cameras in Lidl stores, according to the German news magazine Stern.
https://www.telegraph.co.uk/news/worldnews/1583027/Lidl-spied-on-staff-using-Stasi-methods.html