THE ENEMY OF MY ENEMY IS MY FRIEND: The fact that this well known strategy is being employed by so called “centrist” governments, exposes their pedigree. They are of the Deep State – the globalist Liberal World Order who are so well experienced in playing the Dialectic (playing one side against the other). Following the money, we realise the one undeniable fact, which no one can dispute, is that you could count the number of “right wing”, “far right” or “patriotic” NGOs on your one hand. However there are so many Far Left Wing NGOs, all closely aligned with Left Wing parties, it borders on the ridiculous. In fact there are more “anti-racism” NGOs in Ireland than there are actual cases of racism! Even the United Nations has called Ireland out for this! In the UK we have the absurd situation where a far left NGO (HNH) is the official adviser to the Home Office!

While a lot of this left wing, migrant & Islamic funding comes from globalist Oligarchs like Ge
END_OF_DOCUMENT_TOKEN_TO_BE_REPLACED 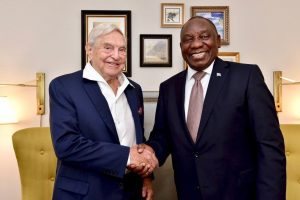 George Soros has a long history with, and already has invested deeply into the far left in South Africa. From funding the DA, antifa and Black Lives Matter, to for instance Reclaim the City, a Soros-front, which occupied two provincial government buildings in 2017, in the hope of pressuring local authorities to hand out “affordable downtown accommodation” in Cape Town for free. But they drew no distinction between “affordab
END_OF_DOCUMENT_TOKEN_TO_BE_REPLACED

It is clear form this RTE propaganda piece that Shane O’Curry, leader of ENAR Ireland and a antifa activist is more interested in attacking the Irish state than actual cases of racism. His income is derived from foreign funding ENAR receives from various George Soros NGOs and The Muslim Brotherhood – clearly a case of foreign meddling in politics…

By getting political parties to sign a made up non racism pact before the local elections, he literally attempted to capture the Irish government. Who knows what pressure will be applied to politicians who signed up to it once they are in power…

Indeed Shane who works at ENAR’s office as one of only two staff members (at a cost of millions), has stated previously that white South Africans who
END_OF_DOCUMENT_TOKEN_TO_BE_REPLACED

It seems the Irish Occupation regime’s decision to open FOUR Direct Provision centres in quick succession has drawn sharp objection, not only from indignant locals, but has also prompted a secret visit from conservative documentary maker Lauren Southern, whose documentary “Farmlands” about Farm Murders in South Africa (see video at bottom) has received wide acclaim with over 2 Million views on youtube.  Lauren is working on a new documentary entitled “No Borders”.

The far left organisations behind the invasion of Ireland, like the Irish Immigration Council, the Irish Refugee Council, Refugee Integration Agency, Dept of Justice, etc. etc, resorted to sending out an emergency alert to all direct Provision centres to warn their profit units (migrants) about the bad boogeyman (rayyyssists!) who would offer them bribes to do an interview.

Whilst this claim is totally false, Lauren has confirmed to Irish news that she does not pay anyone:

French President Macron has declared war on Europe and has said leaders of Hungary, Italy and other patriotic nations were right to see him as their main opponent, thereby upping the ante in the bitter European debate over mass immigration policies.

Hungarian Prime Minister Viktor Orban and Italy’s Interior Minister Matteo Salvini on Tuesday launched an anti mass immigration manifesto aiming at next year’s European parliament elections, and countering the opposing camp led by the French and German presidents.
“There are currently two camps in Europe and one is headed by [Emmanuel] Macron,” Orban said at a press conference after holding talks with Salvini in Milan. “He is at the head of the political forces supporting immigration. On the other hand, we want to stop illegal immigration.”

E.U. countries are expected to go to the polls in May 2019, and Salvini has aligned himself with some of the patriotic “Visegrad” countries: the Czech Repub
END_OF_DOCUMENT_TOKEN_TO_BE_REPLACED

Surely this is illegal? Or is it only bad if Russians do it? A new anti-BRexit political party in UK is being setup and assisted and inspired by Emmanuel Macron’s En Marche Party and actively supported by some of his French MPs. Its aim is to reverse BRexit.

The launch of the new movement called Renew had been kept secret in the UK, but word has got out in France where MPs from Macron’s En Marche party have helping out and offering advice and support.
END_OF_DOCUMENT_TOKEN_TO_BE_REPLACED

And just look at who, 10 years ago, acknowledged that she served on George Soros’s advice for the Open Society Foundation! Insights into Helen Zille’s background and her philosophy. Moneweb: Here in South Africa the Open Society Foundation was founded By George Sores, who’s well know in financial circles. But you also played a quite..
END_OF_DOCUMENT_TOKEN_TO_BE_REPLACED

If the Fake News Mainstream Mass Media were doing their job properly, people would now be out in the streets, dancing, after the announcement that David Rockefeller has died at the age of 101 in his sleep at home in Pocantico Hills, New York, on Monday morning as a result of congestive heart failure, according..
END_OF_DOCUMENT_TOKEN_TO_BE_REPLACED